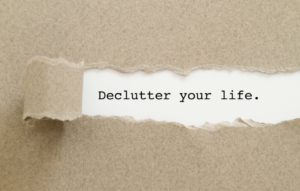 The art of a good clear out, to help you establish who you are

I think there are many tough things about facing up to childlessness, and actually going through it, but chief amongst those difficulties is describing, and doing justice to just how painful an issue this is to people on the outside looking in. I don’t know about you, but for me the early years of having to face up to my childlessness, were marred with isolation, loneliness and not having the words to say just how pointless I felt.

Even now, pointless doesn’t really convey the emptiness or the absolute fear I felt at not having a grasp on who I was and what I was here for. This was an existential crisis, the like of which not many people have to face up to. If I’d described this to any of my friends, my family or even my partner, they’d probably have thought I was having a mental breakdown. And I think, in a way I was.

Up until that point, my whole focus and life had been about having a family. I had a job that meant when I had a family I would be taken care of. I worked my way up the ladder so that I had a good income so that when I returned to work I would have enough to look after a family. We had a home and a car, shaped for a family. I had the diet (though not 100% perfect), I had the exercise regime, I had the books, and the paraphernalia to make sure I maximised my chances, little realising that I had naff to fuck all chance of succeeding.

But, that’s always been the way I’ve been. If I want something I focus on single-mindedly until I’ve achieved it and then I build on it. I had never experienced ‘failing’ on this scale before and so when I was unable to have the family I wanted, my sense of self, and who I represented, turned to dust in my hands. It wasn’t even as if I could point the finger at something, or even someone, else. The finger of blame pointed squarely at me for my failure to have the family I wanted.

Whew! Even now, that is tough to write, because it means I have to look back at who I was before childlessness and who I am now. I have to feel into those scary emotions and feelings…it’s all a bit yuck. But the biggest one is the pointlessness and the lack of a focus that scared me the most, and I see it a lot in our community when people talk about themselves.

But, let me reassure you that this questioning seems to be a normal part of the process and this happens for a number of reasons:

Society tells us, our families tell us, we should all be breeders

You only have to look at sex education, teenage magazines, parental expectations and fucking Disney, to see that the expectations are drummed into us from a very early age. That messaging being, we all grow up, meet someone, get married, have children and live happily ever after…but that’s not the reality for a sizeable proportion of us.

And where does that leave us when we don’t measure up to that messaging? Feeling as though we’re not good enough and we’re pointless. Yeah, screw Disney and it’s happy endings eh!

But taking it back to us, individually for a moment. It doesn’t matter how you came to be facing childlessness, there will be grief associated with this loss. And like any loss there comes some scarring and some questioning of your life.

If you’re back story includes health problems with you or a partner, if it’s involved a string of losses, break-ups, problems and traumas, that all takes its toll and leaves you questioning everything you’ve built up in your life, your choices, who you are and what you represent. And that all lands in your lap, when you have to survey the damage and accept childlessness.

I can hear you asking what this means and how you get out of this horrible sense of being lost and pointless. I wish there was a one-size-fits-all solution, but just as your backstory is unique to you, so too is your path to finding a way to find purpose again.

But my starting point to finding purpose again was to survey everything around me, decide what needed to go and then I could decide what I wanted to keep, which meant a literal and figurative decluttering of the life I’d built on shifting sands.

Decluttering my life of pointless shit

I became a bit of a decluttering demon on the quiet actually. I cleared my office, I cleared out all ovulation kits, pregnancy tests and I even Spring cleaned my bookshelves – removing any books with a passing reference to fertility, and procreation. If I wasn’t going to have a child in my life, then neither would I keep any of the paraphernalia associated with it in my home.

It was hard, because I was accepting that simple fact, but it also meant I wouldn’t be caught out with stumbling over random stuff from that phase of my life.

Once I started this decluttering, it seemed to take on a life of its own. I went through my wardrobe and any clothes I’d purchased during that time when I had experienced a pregnancy and had hoped for another, were sent to charity stores.

Any clothes that I had purchased during my depression (I spent more money than I had on clothes to give me a lift and never wore them…it took me years to clear my credit card), were sold on Ebay. Any clothes that hadn’t been worn in the last 12 months were cleared out too, because that meant they weren’t for me.

It was similar process after my hysterectomy, I cleared all of my sanitary products when I got back from the hospital. They were sent to the food bank. I just didn’t want the reminder and it meant I had space for other stuff that remained relevant.

It was the emptiest my office, bookshelves and wardrobe had ever looked. But instead of me just feeling sad, I felt relief, that I no longer had to pretend that I would be a mum to myself and I could move on and fill the space with something else. It was the start of me beginning to realise I could press reset.

Decluttering my mind of toxic shit

I picked up journaling again, because despite going for counselling, I just didn’t have the words in me to share the evil feelings I had about myself. It’s a strange feeling not being able to communicate how I was feeling, despite English being my first language. Perhaps that’s why it can feel so lonely – the fear of being judged and the lack of vocabulary…

It also gave me the space to vent, without judgement and meant that I didn’t allow it to leak into other areas of my life including my friendships and relationships. It also meant that at least somewhere I was able to express the negative emotions, honestly without having to explain further.

Filling up the new gaps

Decluttering can leave you with a lot of gaps and questions over how you fill them up again. There’s no denying that there is a child shaped gap and nothing will quite fit that, but that’s not to say that you can’t find pleasure in other things to help you cope.

My efforts to refocus my life and my way of being, was to start to think about what I liked and loved doing, before I started to channel everything through the lens of being a mum.

I started drawing again, before I knew about art therapy, I started reading fiction again, rather than books about fertility, and I started walking, so that I could get back to running long distances again. All of it for me, not for the purposes of becoming a mum.

It’s little steps like this that meant I was able to start thinking about goals again outside of becoming a parent.

It wasn’t easy and there are still times I question where I’m headed and what life will look like in 10 year time, when I’ll be closer to 60 than 40 (yikes!), but everything has to start somewhere and focusing on what’s not working, means you can get clear it out and shift into what does work for you.