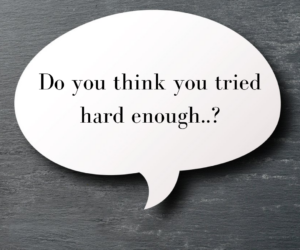 'Do you think you tried hard enough?' and other quality comments that let you know its time to sack someone off...

I know that there isn’t one of us that hasn’t experienced a hurtful comment from someone about our childlessness. But I think what I find the most difficult thing to deal with is the sheer variety of comments that come barrelling towards you, from unexpected quarters without a moment’s notice.

I mean these little snippets of insensitivity, can vary from the completely tasteless comment about us ‘not knowing love’ because we’ve never become a parent, or the shitty little jibes about how we can’t comment on parenting, because we aren’t qualified. Oh god! Or even better the question we all dread ‘have you got any children/are you married?’. I mean since when has that been anybody’s business but our own?

The last time I was asked whether I had any children, I had to bite my tongue, because the blunt response was there, right on the tip of my tongue…’No, actually I wasn’t able to, as I’m infertile. So, can I just ask, when was the last time you had hot, steamy sex with your partner then..?’. Just something to shock and silence someone with a personal question that makes them blush, so they got a sense of the emotions I’d felt when this was launched at me in a business meeting.

Because that’s how close to the knuckle and personal that question is, for anyone who’s part of this community. But, for anyone that has been lucky to have a family, it’s simple, lazy small-talk and an easy way to turn the conversation to their children. I’ve seen it time and time again, where parents bond over the latest achievement from little Jonny or Cassidy. It’s banal, it’s downright predictable and it means that we automatically get closed down and out of social conversations, because we don’t have a family. Not that I want to stand and listen politely to this sort of bullshit, because let’s face it, unless you’re related to that child, it’s fucking boring listening to people witter on about their kids.

But, the thing is, it’s not just the words that are uttered that cause the problems, because more often than not, these comments are launched at us in social contexts, from people that we’re close to. And heaven fucking forbid, that we should even contemplate responding with anything less than a cool, calm demeanour though, because that makes us the fucking bad guys.

Take for example my own experiences of hurtful comments that have stayed with me for a very long time afterwards, and there are a number I could pick from. But let’s start with this one – a very close friend, and someone who I had shared my fertility ups, downs and really downs with, once cut me to the very quick with one of her comments. I had come out the other end of my fertility shitshow, and was still trying to get over the fact I’d been told I wouldn’t be able to have children. I was a mess, but I’d made the decision to not pursue IVF.

The decision hadn’t been taken lightly, I had weighed it all up and decided that it wasn’t something I could face after all the procedures and nonsense I’d already been through. After all the scarring and the gyneas, of various degrees of usefulness, examining my insides and my lady garden (never fails to make me laugh…), I really couldn’t do anything more. Especially, as the Endo had successfully reduced me to one badly battered, barely functioning ovary, which meant that the odds were somewhere between fuck-all and none, in terms of it working.

But, you know what? That didn’t stop my best friend, the woman I had shared the whole of my story with, who had seen me fucking falling apart and scraping myself off the bloody floor, saying ‘Do you think you tried hard enough?’. Wait, what?! And the thing is, I was so blown away, I wore it and went back to justify why I felt I had done enough…isn’t that fucking mad?

Perhaps some of that reaction is a reflection of where I was at the time. I mean early stages of grief, a very high level of numbing the pain, so that I could function at a basic level and I guess my own baggage with people-pleasing, combine to make for a bonkers response. Whereas now…well you can imagine, I don’t need to paint that picture for you.

But, here’s the thing, I have seen some truly courageous people from our community share their own experiences of standing up for themselves. Sometimes, it’s with strangers posting stupid, stereotypical shit on their timelines about being a parent, or the usual crap we’ve seen on social media of late. But I think the harder ones to read are when it’s a friend, or a family member, that really should know better, because you can see the pain and the confusion in the posts. These people are meant to understand or love us and they know our backstories – these are the ones that hit home the hardest.

Perhaps there’s a level of understanding that people that don’t know us and make these sweeping statements, aren’t aiming them at us individually. We can get angry, we can respond and take some comfort from the fact we don’t have to have this arsehole in our lives. That makes it infinitely easier to move on quickly with the rest of our lives. But, if that comment has come from someone who knows us, our personal pain and was meant to be in our corner, that pain, hurt, disappointment and frustration sticks around.

Next week I’ll be talking about this in more detail in terms of what we can do to resolve some of that pain.