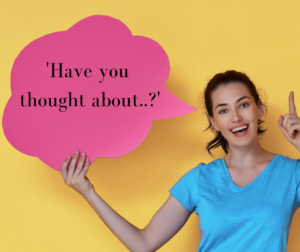 'Have you considered trying IVF/fostering/Adoption/sperm donation/egg donation?' and other helpful comments

Hands up, how many of us have had the helpful little comments and suggestions thrown at us, when we explain our situation? I would imagine it’s a good 75% plus that are presently sitting reading this with their hands up. You know the one where they ask, ‘have you thought about…(insert any of the following – adoption, fostering, IVF, sperm or egg donation’).

I’m not sure what response they expect really, because it’s not as though we’ll sit thoughtfully and say ‘Well, no actually. Who’d of thought there were so many options I could explore…’. So, they usually look baffled with the reaction they get, which in my own experience has ranged from ripping them a new one, to patiently explaining that it’s not like shopping for groceries or visiting an animal shelter. Would that it were, but it’s not.

The suggestions generally come from a good place, believe it or not. Someone sees your pain at not having the family you want and they think, ‘I know what can fix this. I can suggest a magic bullet that will mean I no longer have to see this person’s pain’. It’s not that they mean to be hurtful, but it’s the lack of knowledge about what is involved in each of these options that rankles. The lack of consideration that actually you’ve considered each of those options, realising that they’re not for you for x, y and z reasons and have felt more heartache compounded on what you already have. And, then there’s the minimalising of our grief, rather than sit with it and allow us to share how we feel. So, is it any wonder that we feel triggered or angry or even sad when this is thrown at us.

Let’s start with the obvious one, adoption, because people have said this to me, including my mum. I was still coming off the morphine post-hysterectomy when we had a conversation about whether I’d wanted children and if I’d thought about adoption. Remember that I’d made the choice not to tell my mum and dad about any of my fertility shit-show until this point, so please don’t judge them that they asked at this late stage…that was entirely my decision and on me.

However, maybe it was the morphine, maybe it was the fact my focus was more on the increasing swelling post-op abdomen, which made me look as though I was pregnant, or perhaps even the creeping dread of that first trip to the loo (if you’ve had morphine, you know where I’m coming from on this…), but I actually took the time to explain what had happened and why adoption wasn’t something that we would be able to consider.

There were many reasons and doubtless you can relate to these, because I imagine we’ve all had these thoughts about the options that we could have if we wanted them, but my own issues included:

And this is the thing isn’t it? As ‘helpful’ as people are trying to be, unless they’re part of this community, they have no idea what the investment is or what it costs in terms of trying to find a ‘solution’. But, they do it, because it’s painful sitting with someone else’s pain and, we’re all problem solvers deep down. It’s what we do as human beings.

However, how do you deal with these ‘helpful solutions’ when they come at you from these well-meaning people? Well, it depends on what the outcome is that you’re looking for, but let’s have a look at my experiences to help guide you:

Option 1 – Decluttering your life of family and friends

You can lose your shit with people and tell them to fucking jog on. I’ll be honest I have done this, and it’s not that productive in terms of helping them understand why I’ve lost my shit. It’s also meant losing friends and being labelled a miserable, moody cow (that’s the mildest form I can think of). As reactions go, it’s the most cathartic and perhaps the one that fast-tracks us to loneliness. That’s not to say that it’s the ‘wrong’ reaction, because as far as I’m concerned they’re all fair game, but in my experience it’s not the best, unless you’re ready to declutter your life of people.

Option 2 – the glassy stare, usually off into the middle distance

This one tends to come about when we have to shut our emotions down to prevent options 1, 3 and 4 happening. The glassy stare is indicative of being in the early stages of grief and the numbing needed to keep our shit together for the sake of our own sanity. I’ve seen this response from many of my childless friends when they’ve been triggered and I know that I can use this at times of extreme stress. Some misread the silence as us having the hump, but actually it’s shutting down to protect ourselves and others around us from having to witness that pain.

You can shut the conversation down. Depending on who it is and the context, you can change the subject, just respond with a simple ‘yes (it’s a closed question after all..) and then we can all move on with the rest of our lives. However, it does tend to led to yet more bloody questions getting thrown at you. People can’t stand an unanswered question and simply responding in these terms leaves them wanting more details. My advice, unless you have infinite levels of patience and can face down the follow ups with Bruce Lee-like agility, use another option.

Or lastly, you can take the time to answer their questions and point out the flaws in their thinking. An education piece if you like. It worked for me, in the sense that I answered all the questions my mum had and the issue has never reared its ugly head again. But, this requires a lot of effort from you depending on where you are with your grief and what head space you’re in at the time. It also means a deep well of patience and resilience to be able to talk about something deeply personal to you. And sometimes that’s just not possible.

I’ve found that as I’ve moved along the path towards acceptance, I have generally moved more towards using the last option. It’s not that it’s the best option, it’s just the most suitable for me, as I’ve come to terms with my grief. It’s not always the one I use either, as it depends on who’s standing in front of me, their levels of fuckwittery and the number of fucks I have left to give on that day and at that moment.

But each of these options has worked for me in different ways and for different reasons. I think it’s just a question of assessing where you are and what you can cope with…and how much you want that person in your life.