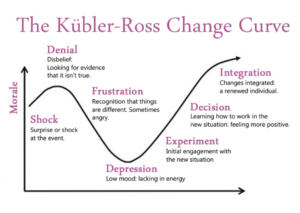 Change is hard at the best of times, but when it’s thrust upon you at speed, that’s where we can struggle.

You’d have to have been living under a rock, in the middle of the Gobi desert to have missed what’s been going on across the globe. We’re truly living through exceptional times, where everything has effectively changed in the blink of an eye. Whether it’s the olds being told to stay home, people shopping for toilet roll as though it’s a rare commodity, or people being told not to travel for anything other than ‘essential travel’, it all feels very surreal.

I have to admit that I have really struggled with seeing what’s been happening, especially when I see vulnerable people being left behind in people’s rush to grab what they want. I hesitate to use the word ‘need’ because let’s face it no-one needs 36 bog rolls or three six packs of 1 litre bottles of water, at this time. But, nothing had prepared me for seeing shelves empty at my local Co-op, and then the heart-breaking sight of the old and the vulnerable looking lost and bewildered.

If you plaster your own worries and concerns over the top of what’s been happening at a societal level, it can quickly escalate into overwhelm. I mean I have moved from denial, to anger, through frustration, stopping at sadness, tears and then through to fear. All this over the relatively short amount of time this has been going on. I guess I’m now at the point of being OK, and just accepting that life is going to be difficult for some time to come, but I know I have it easier that some of you out there.

I imagine you have also been going through this tumult of emotions too, because you’re human and you might also be experiencing the same or similar feelings to my own. But, let me reassure you, that all of this is completely normal in terms of how we, as humans experience change.

But, it seems to me that the CNBC community, more than most, has some familiarity with the emotions that have come up as a result of these unprecedented times. And perhaps that familiarity, around the sense of loss and isolation is because there are massive overlaps with the Kubler-Ross grief cycle (I know! The same authors).

I first came across the change curve, in a completely different context to childlessness. It was something that was discussed at length during meetings at my previous employer. Why? Because we were going through a huge restructure, with the inevitable change and redundancies that entails. Both of these things cause emotions linked to grief and loss, as people face changes and a future they hadn’t bargained for.

But, putting that aside, knowing there was a reason for my reactions helped me realise that my own emotions and those of my team at the time were entirely normal, and that we all go through the change curve at different speeds. The speed that we experience the change curve is individual, as is the process though the grief cycle, and it all depends on our own perceptions, how we have adapted in the past and what experiences we have to draw on, that help our behaviour when something else crops up.

Putting the grief cycle and the change curve together like this shows that both change, in terms of what we’re living through at the moment and childlessness, elicit similar emotional responses. Knowing what we know about how we dealt with the loss of our dreams for a family, it’s no wonder that we can find ourselves experiencing feelings of loss, and some of the sense of isolation all over again.

And, I know for me that it’s been tough seeing the elderly that are on their own, because it’s something that I absolutely fear and dread as I get older. It might be that you are already living alone and so this could also be triggering feelings of vulnerability in you too. It all makes for a level of uncertainty that can be hard to deal with, which impacts on our mental, emotional and physical health.

Over the coming weeks, and months, I’ll be focusing exclusively on our mental health, because I know from volunteering as a trainee counsellor that people are going to really struggle with the massive changes that are going on. I’ll be sharing a lot of what I’m doing to support myself, with my on-going list of things that have helped me cope. I’ll also be around more for those that need it, from offering lives in Facebook group, so that we can all gather somewhere if we need it.

These are tough times to be going through, so stay safe and stay well x