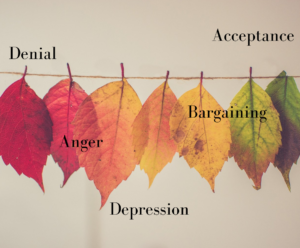 There’s no instruction book telling you how to grieve, or what to feel, or how to behave, or how to get through it…so how do you do this grieving thing then and what's the point?

We’ve talked about the grief cycle before. You know the cycle that isn’t a cycle. It looks like this and you can find yourself in one or more of these stages at various times, at various points of your grief journey and there’s no straight line between each of the stages…

Getting stuck and feeling the feels

Let me give you my own experiences of grief. When I was first told that I wouldn’t be able to have children, I had no inkling that I would end up grieving that intangible loss. I mean I had grieved, and in fact still am grieving, for the loss of the one pregnancy I had in 2012, but I hadn’t expected that the feelings would come back when I was told there wouldn’t be a family for me in 2014…and again after my hysterectomy in 2018. Sounds so bloody naïve when I ‘say’ it out loud.

As I look back, I have to admit that I wouldn’t have given myself a five star rating for the grieving that I did after I lost my child or after that 10 minute consultation in 2014. It’s only with the benefit of hindsight that I can see I stayed in denial for a loooooooong time. Although I did dip my toes in anger and bargaining. But, when I tipped head first into depression there wasn’t really any acknowledgement of my emotions. I mean I went for counselling, I even took time off work and considered taking anti-depressants (a big deal for me), but I never really engaged with the emotions – just anger and depression. If you’d asked me what I was feeling, you’d have got a shrug. I just didn’t have the words, as I just felt pretty dead inside.

Fast forward to the hysterectomy and the grieving was no less difficult, it was just that I had more experience of it. I guess I knew what was coming, but I also knew that I was willing and able to help myself more. And these are the steps that I took:

I’m not going to say that I am entirely out of the woods in terms of my grief. I’m not sure I can ever say, hand on heart that I’ll ever be entirely clear of it, but taking these steps helped me to feel I was making progress and I wasn’t stuck.

Are there any benefits to grief, I hear you ask? As I say I’m not entirely out of my own grief, but I have noticed some big changes in terms of who I am and how I turn up. I mean least of all, it’s meant I’ve given up a job to go self-employed…

For those of you that have followed me for a while, you will have heard me talk about how I was a people-pleaser and how I never spoke up for myself. What might not be so explicit in that admission, is the acknowledgement that I repressed an awful lot of emotions and feelings, even before my fertility journey took off. As a consequence, I was no stranger to mental health problems, and I carried a hell a lot of baggage as a result.

Fast forward to where I am now, my grief has meant that I’ve had to unpack and unpick a lot of that baggage. I’ve had counselling for the childlessness, but as is often the case, the counselling has meant picking apart other issues too. It also meant being able to give voice to all the emotions I had pushed down, repressed or ignored – which is bloody hard work when you’re grieving anyway.

But, the benefits of this is as a result of the grief, I have started to address long overdue issues and have started to see a change in my behaviour as a result. I’m no longer a people-pleaser and I do things for others because I want to, not out of some ridiculous sense of obligation. I’ve also embraced my love of swearing and I’m not afraid to tell people what my boundaries are and when they’ve been crossed. That’s not to say it always comes easy, it doesn’t, especially when I express a need that rocks the boat or causes a bit of a kerfuffle.

But working through grief is hard work, and so there has to be a pay back as a result, if you take the opportunity to deal with it. For me it was dealing with my accumulated shit, exploring who I felt I was and my values and putting that into how I turn up and behave. I imagine for you, it might be the same, or it might just be the opportunity to review your life and decide whether you’re still on track with what you want.

So, it can seem like grief is a brown, steaming turd covered in non-recyclable glitter, but under that crappy exterior lies a real gift if you put in the hard work.