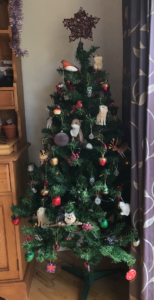 Finding hope and noticing progress no matter how small…

I don’t know about you, but I have been trying to ignore Christmas. I know it’s there, but if I don’t look it’s not. However, this weekend I finally had to admit defeat and acknowledge that there really are only a couple of weeks left. So, I decided it was time to do something that was unthinkable last year – it was time to decorate the tree.

As you all know my backstory I won’t go over it piecemeal. We all have them and they are all painful and littered with our feelings of sadness, anger, abandonment and unfairness. But, sometimes it’s trying not to feel these emotions that holds us back and prevents us from trying things or acknowledging our progress.

And that’s shit, because I think we need to start to notice how bloody amazing we are. We carry this huge burden around with us every day, but we still turn up and we still do our best, despite having to cope with the onslaught of triggers everywhere we go. And then on top of that we have to run the annual Christmas gauntlet. Everyone finds this time of year stressful, but for us there is the added layer of having our whole life thrown into sharp relief, by parading before us all of our triggers on the telly, out at the shops and, most ghastly of all, at family events. It can feel as though there is no escape and so is it any wonder we would rather bypass the lot of it?

But I found myself pondering how it would feel to put the decorations up last week. Would it be as painful as I think it would be? Would I fall apart and have an epic meltdown amongst the glitter and the tinsel? I didn’t know, but I wanted to find out, because I didn’t want to feel the defeat and depression I felt last Christmas, which just meant going through the motions. The decorations last year amounted chocolates, that had been destined for the tree, dumped in a bowl and a feeling of failure that stayed with me for the whole time.

And so it was that I found myself on my own yesterday, rummaging in the loft through the boxes of decorations. That familiar smell of dust and months of staleness that you only get when you start sifting through the newspaper wrapped decorations. As I did so, I realised I had missed it, but I also felt the absence of a family to help me do this. The familiar dull ache in my chest appeared, as did the tears as I watched my cats sniffing the boxes, rather than a six year old little boy running around excitedly. And, right there, all the love that I have for that little boy, whose face I shall never see, or whose hand I’ll never hold, welled up.

It hurts to think that all of my Christmas decorations will never be passed from generation to generation, as my child passes on the traditions that we have in my home. To think that no-one will ever think back to Christmas days with me and my husband with fondness, hurts. And some of that is because we hide ourselves away for the day, as I don’t think either one of us wants to be around people and see what we can’t have, but a sizeable chunk of that comes from not having a family of our own.

Whew! It was intense I can tell you, but despite all of the emotions, I persevered, as you can see from the picture. I felt all of the raw emotions and the hurt and the pain. But do you know what, I also became aware of another presence in the room as I did this. A surprising one that I hadn’t expected.

It wasn’t just having the familiar voices from the podcast – sharing my pain and my grief, as I listened to our next episode. It was the love I feel for my little boy that I can’t place anywhere and so comes out as grief and pain. But, it was also a small glimmer of hope because I realised that no matter how painful I have found this experience, I couldn’t have done this last year or the year before.

I may not like Christmas to the extent that I once did. I may not be able to buy into the excitement and the good cheer and, to be honest, I doubt I ever will. It might not even be that I can consistently put the tree up every year – I’m just going to have to see how I feel at the time. But that in itself represents progress, because it means I’ll be valuing myself enough not to do it if it’s too painful. But, there’s also the fact that I have been able to decorate the tree and cry for my missing son this year. And as painful as it was, its progress. It’s a small victory for me and I’m claiming it.

But, it’s also made me realise how hard we are on ourselves – individually and as a community, in terms of feeling that we come up short or feeling sad at a time of year when others are celebrating. And for those of us feeling it at the moment, I want to add some comfort – we are walking a tough, often invisible path that others don’t understand and don’t always know how to acknowledge. And, while we may feel that Christmas can just jog on, I think it’s a time for us to celebrate the small, and painfully won achievements that we make each and every day, as well as every festive period. We do the best we can and we have so much to carry with us, but every single person in this community, and you’re included in that, are fucking amazing!

I wish you all a peaceful and reflective Christmas this year. And I thank you for your support throughout 2019 and beyond xx