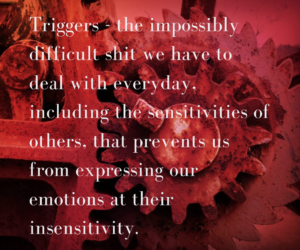 ‘So, do you think you tried hard enough for children?’ and other quality trigger bingo moments.

I’m sure we’ve all had that moment when someone has asked us something so intensely insensitive and downright bloody stupid that either we fucking go off, or it takes all of our personal strength not to flatten the person that uttered it.

This quote was mine when a friend that had known me for a long time, and knew about my fertility struggles responded with this little gem when I mentioned that I wouldn’t be doing IVF.

And I’m sure you’re all wondering whether I ripped that friend a new one…no I didn’t. I was a different person to the feisty and forthright person that you now see. I was more concerned about their reaction if I went off and so,  I didn’t react much at all to be honest. I was so blown away by the sheer insensitivity of the question, I blinked and largely said nothing. But the comment stung and, as you can see that has stayed with me.

It wasn’t just the comment itself but the judgement that went with it that really hurt. It was the realisation that someone I had thought was in my corner, and understood what I was going through, clearly didn’t. And I guess with all of the comments that we face at times, including the one I referenced in my video Monday, there is an underlying judgement about us that cuts to the very core of our feelings around our childlessness.

So, how many of these have you come across then from friends, family and people in general, that feel they have the right to comment on your childlessness?

Just Fuuuuck off! I mean there are so many more I could list here, but let’s leave it there before we all feel like we’ve done ten emotional rounds with Tyson. What do all of these comments have in common, other than their fucking stupidity and insensitivity? They are all coming from a place of judgement or oneupmanship, that makes us feel as though our lives are ‘less than’ and therefore open season for others to comment on, rather than our pain and anger being heard and acknowledged.

And that is the nature of triggers and how they get to our anger and our raw emotions. They cut through the defences we have because quite simply, like a laser guided missile, they hone in on the heart of our pain – that we are somehow less than because we’ve not been able to have the family we wanted. But it also highlights the lack of empathy and understanding from others that can leave you feeling really fucking angry at them, the circumstances and yourself for being in this position. And that can then become all-consuming. But god forbid that you should react to it and hurt their sensitivities eh!

So, if you start to feel that life is turning into one big trigger and that you could literally go off at anyone at any time, then it’s time to start looking at ways to manage this, because the only person that is going to be hurt by this is you ultimately.

In the long term there are other things that can be done to help lessen the impact of triggers, but we all have to start somewhere in order to be able to process them. But don’t forget that anger is a normal emotion and just because someone gets upset at your anger, it doesn’t mean you’ve done anything wrong in expressing it – unless you’re causing physical harm to them…don’t do that, no matter how tempting it is.

There are triggers and insensitive arseholes all over the place, but we can manage these things in ways to help ourselves