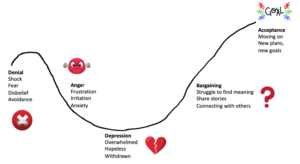 Believe it or not, but my videos when I do them on FB are largely unscripted. There’ll be a title and a theme and a few bullet points on what I want to cover, but beyond that it’s me pulling on my experiences and what I’ve learned. So imagine my surprise on Monday when I talked about feeling ‘normal’. Hang on a minute there Lawrence that wasn’t in the script!

And I guess that in a nutshell is what I’m doing, now that I’m starting to go through the emotions. I’m talking about the thoughts and feelings that most people wouldn’t talk about, because I got sick of not being sure what I was ‘supposed’ to be feeling and what I was ‘meant’ to show or not show while I was going through the complicated grief of childlessness. I mean, it’s not like you get a manual for this childless shit is it?

Looking back it felt acceptable to me that I withdrew and it also seemed for the few people that have known me and my backstory the longest, they could understand me retreating. Although being told by one friend that he wished I had talked about it, felt odd, because if I had been on the outside looking in, I’m not sure I could’ve handled any of the behaviour or emotions that I was displaying – chief amongst them my anger, when it did show up.

On Monday I quoted Kubler-Ross and Kessler’s book ‘On Grief and Grieving’ where it talks about needing to feel the anger in order to process it and be able to move on to the other emotions. Yes, in principle this is very true, but this is a very sanitised version of what happens to us when we’re going through a very complicated grief.

When my anger did start to show itself, it was a wild and untamed, pretty unmanageable beast, even to me. I would drink too much and get very argumentative, aggressive and downright unpleasant. I was defensive and if you said the wrong thing I might go off, or I might cry. I was riddled with social anxiety and worries about whether I was ‘good enough’ to be considered a woman. I couldn’t stand being around other women because I felt like a failure and an outsider. I couldn’t be around men, because they didn’t understand me or my anger. It was isolating, frustrating and it irritated the shit out of me…which all made me angrier, although I couldn’t have told you why at that point.

And because I wasn’t used to showing anger, I was never sure how it would come out, so it was also frightening and resulted in many internal battles to suppress it – never a good thing to do. The fact is though, I was always questioning whether I would end up showing myself up by crying in public, or would I pick a fight with the wrong person and get my face filled in. It was a turbulent time both inside my head and outside in the big, wide world. I had no tools or coping mechanisms to deal with it, as I was in new, unmapped territory.

So it was something of a relief when I started to learn about grief through Jody Day, because here was someone relatable, who had been through this and had come out the other side. While everyone is individual, it did at least normalise what I was feeling. And while I wasn’t ready to do the work yet, it did at least provide something of a framework of normality that made it OK for me to feel the way I was feeling and explained why I was acting out. I wasn’t a ‘bad’ person for having all of these ‘bad’ feelings, I was just grieving in my own unique way, but also following a road map of human experience.

So, if like me, you need a road map or at least a framework in which to be able to understand and grasp what’s happening then I hope the grief cycle can at least make you feel as though what you’re experiencing is ‘normal’. Although your journey will be unique to you, there is a common thread that passes through all of our experiences of our childlessness and our grief.

For those that don’t click with having a framework and just want to know that they’re going to be ok, yes you will be. I can’t tell you when the ‘normality’ returns, because it’s our own unique journey and we all come at this thing with different accumulated baggage and our own filters on life. But rest assured if you’re starting to feel anger or have been feeling it for a while, it’s normal and means that you are better prepared for dealing with the other emotions that are queuing up behind it.

It’s taken me a while to work out what has worked for me in terms of processing my anger, and I’ll be sharing those on Friday, but I can honestly say that I am better able to manage it now. It’s not been a case of just learning to live with it, but more a question of looking at myself and learning to like myself again. Because the anger wasn’t just at my childlessness, it wasn’t just about being the first emotion I felt, it was my anger at myself for being unable to have children. I hated myself, and my body – I looked at my behaviour and my physical body and didn’t like what I saw.

Everything you're feeling is 'normal', even though this is your unique journey.