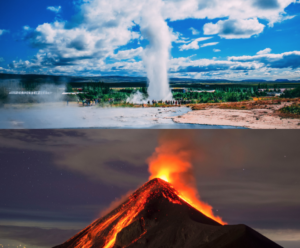 Are you a geyser or a volcano?

Hello. My name’s Sarah and I’m a volcano

For those of you that are from my neck of the woods – the South of England, I’m not talking about a geezer, diamond or otherwise (for those that aren’t aware, a geezer, is a male, of certain characteristics – usually likes football, pints, down-to-earth and is something of an alpha male). I’m talking about how you let your anger go when it comes up.

I’ve always been impressed by people that are able to show their emotions in all their technicolour glory, especially anger. I’m not talking about those people that start pummelling the nearest animal or human because they’re angry. No – there’s a special place in purgatory for them. I’m talking about those people that can succinctly, but assertively tell you when they are angry and then tell you why. I have to admit that these people seem pretty rare to me, because more often than not, it’s either a meltdown of epic proportions or a passive aggressive response that leaves you none-the-wiser over what you’ve done to offend.

It’s for this reason that I started ruminating on the types of people we have in the world and how they express their anger.

For the geysers amongst us, they’re someone that allows themselves to feel and express their anger as they move through life’s trials. It might be that they have something of a reputation for being temperamental or even unpredictable, because it seems like the smallest thing can set them off. So, although they go and they get angry, it’s a whole lot less spectacular when they do. And also a whole lot less dangerous. They’ll say their piece, they might blow up, and then everyone, including them, moves on with the rest of their day.

However, if you happen to be like me, you’ll be a volcano. What do I mean by this? I mean you bottle up and store up your anger or you might even swallow it down until it becomes something of a throbbing abscess, waiting to be lanced. You keep adding to the pile of things that have pissed you off, or that you have felt wronged by. You start to feel depressed, frustrated and irritated that people can’t see your pain. I mean why the fuck aren’t these people able to read our minds? What’s the bloody matter with them? But still you can’t express it, you just don’t have the words to tell them all to bloody jog on, or why you’re annoyed with them…until one day…FOOM! And it’s stand back everyone because this person has fucking blown their stack over having the wrong filling in their sandwich (and yes, I’m not too proud to admit I have done this).

But it’s not about the sandwich is it? It’s about all the shit that has come before the fucking sandwich. It’s about the inability to be able to find the words or even to feel safe enough to blast when we need to. And it’s about the judgement that we feel when we’re not able to pretend that everything is just peachy! Because I bet if we all got in a room and I asked ‘who today has felt able to express their hurt over their triggers in public?’, none of us would hold our hands up, me included.

And I guess there is the problem in a nutshell. It’s all to do with communication and voicing what’s going on for us, because people aren’t psychic and many of them aren’t aware of the issues that we, as childless-not-by-choice, have to face on a daily basis with living in society with all it’s wonderful triggers. And that shit accumulates fast when you’re not feeling good about life, your circumstances, or yourself. I mean every single trigger and child we come across is a red, neon sign showing someone else’s success and highlighting what we see as our failure.

But anger doesn’t have to be the result of this. You don’t need to put yourself through the wringer, by either blasting or bottling it up. Let me be clear there is nothing wrong with anger, it’s a normal emotion and we all feel it from time to time, but when it becomes toxic is when we can’t speak about what is really bothering us – our childlessness.

And I’m not going to say this is a simple solution and that talking about it suddenly solves everything. It doesn’t. But it does stop becoming an act of self-harm when we start to talk about this stuff. Believe me, I have become less likely to erupt, because I tell people when I’m not happy. It hasn’t come easy and there are still times I bottle, rather than say, but I have definitely felt less burdened with other people’s shit. As a consequence I no longer feel the need to hang on to things that bother me at low-level irritation and therefore the accumulative effect of other people’s shit wears off. But it does mean being brave and saying when something they have said or done has annoyed me – which is usually in an assertive way about the issue rather than ripping someone’s head off over a sandwich.

Communication is the key - as tough as it can be, telling people in the moment what's happened is easier on everyone than bottling it up