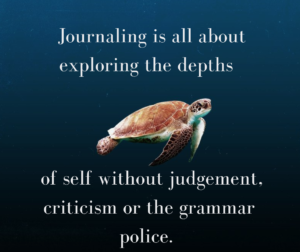 Sadness - tools to help over the longer term - journaling

If you’ve been watching the videos and reading the blog posts you will have heard me wittering on about journaling before. So, I know I’m probably in danger of sounding like a broken record with this, but for me journaling is a critical tool that helps me process the sadness and find the words to communicate what I’m feeling, to me, to others and to my counsellor.

When I think back to when I was first told that there wouldn’t be any children for me and my partner, I can remember how silent I was. It was almost as though something had hold of my vocal chords and nothing about the emotional turmoil I felt was able to surface. Even my own internal chatter shut down, which made it very difficult to be able to explain how I felt to anyone or even myself.

As a consequence the emotional burden I carried seemed to take on a life of its own. Yes, I felt numb, but when the pain did start to show itself, the tears I had and was able to shed, didn’t do it justice. There was a thick layer of disbelief, that clung on for years until the hysterectomy. When I did start to explore things there was a heavy, turgid nature to what I was able to say. I simply wasn’t able to identify one emotion because they had all become entangled together.

As a consequence I ended up in this horrible place where everything felt heavy and a burden. Every day it was an effort to drag myself out of bed. Interactions with people were impossible because I couldn’t connect and I didn’t want to. It was no exaggeration to say that even going to the door caused me enormous anxiety and eye-contact… forget it.  I felt utterly alone, sad and worthless.

And this is because sadness (along with the more clinical terms of depression and grief) are sticky emotions on to which a lot of other ‘stuff’ (technical term there) adds itself. While we’re talking about the emotions separately we never, never feel them in isolation. Much like that film ‘Inside Out’, as we get older the emotions become more complex – we might have a happy memory that’s tinged with guilt. Or we might start to overlay happy memories with other emotions because of where we are now. What do I mean? When I think back to the happiness I felt at the moment when I knew I was going to be a mum, that is now such a painful memory that it is overlaid with masses of sadness because it was only ever a fleeting moment and so it no longer represents a happy memory, but a very painful one.

But getting back to the main point, which is all about us finding our words…very shortly after being informed that I wasn’t going to be a mum, I started counselling. Sounds counter-intuitive doesn’t it when you can’t speak? But I knew I needed help, to get to why I felt so shit. I knew it was a ‘talking therapy’ but what happens when you can’t talk about the issue that is causing you the most pain? There were sessions where we sat in silence, there were sessions when I talked about anything but the elephant in the room and there were sessions where I turned up late and left early because it was just too painful to go there. But I did at least turn up, which is a start.

When we did eventually start talking about why I was there, we were months down the road. I don’t trust easily and, at that time, I didn’t like talking about my emotions. Yes, it was a challenge, but the thing that helped me bust through this voluntary muteness around my childlessness was journaling. Much like running, I owe it a lot, including my ability to now blog and video myself talking about this stuff. It helped me unravel the emotions, it helped me explore events in my life around the childlessness and the accumulated crap from before this. But, above all it has helped me process and find my words.

The thing I love about it most is there are no rules, there are no right or wrongs and there are no grammar police telling me that I need commas, or exclamation marks. It’s just me, talking to me. It’s an adult way for me to talk to myself about something that’s bothering me, or setting new goals (because that’s bloody hard when you can’t fulfil your dream for children isn’t it?) and it’s also about finding the words for the feelings you have that you can’t explain to others.

I shared some of my journal a few weeks ago – all around the bloody C-word (Christmas – eugh!) and how I was feeling at that time. It was stuff that I couldn’t share with others, but I could at least be honest with myself. It allowed me room to express my emotions, rather than bottling them up. It gave me space to process what I was feeling – and believe me my journal does have some pretty toxic entries which I would feel ashamed to share with others. But none of that matters because I’ve been able to process that shit in a non-judgement journal, so that I can find my words.

Sound weird? Well yeah it is, but I can’t tell you how useful this has been in being able to unblock my throat when times have got tough. Journaling has helped me find the words and keep talking, to the point that I am able to make better use of counselling. Yep, genuinely all of that from writing to myself. And that’s what I want for everyone in this community – being able to be honest with yourself, and to find the words to tell yourself and others how you feel.

Because, journalling starts with you being able to be honest with yourself, but then helps you find words, it helps you talk about things that society would rather not talk about. It helps you be you.