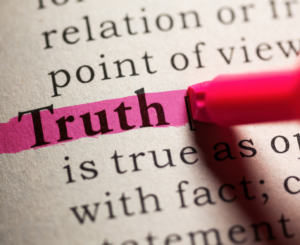 Lessons I've learned about being honest with myself

I’ve always thought I was an honest person, as I’ve been told in the past that I’m honest to the point of rudeness. So, I’d always assumed that I was, you know, what you see is what you get and that this same level of honesty and toughness applied to myself as well.

But I was very wrong and it wasn’t until I had started to recover from my hysterectomy that I realised that I had been kidding myself over the levels of honesty I’m willing to show to people, including myself. I mean how honest can you be when you’re the bottom of your own list of priorities? That’s how bad it had to get before I could be honest and admit that I was a total people-pleaser.

But having sacked that shit off now I’m able to be more honest about who I am and have an awareness of how I turn up for things. And this has made me reflect on honesty and what needs to happen before going for it in terms of rummaging behind our masks…

Yes, I am direct. I don’t mince my words and if you’re looking for fluffy and flowery language, I’m not your woman. And yes, if you’re going to act like an arse around me, my less-than-ace poker face will tell you.

However, this isn’t being honest with someone, especially if they’re not respecting boundaries or are triggering every trigger we have when it comes to our childlessness. Instead, if you’re anything like me, you’ll take that shit experience, ball it up into a hard bitter little pill and swallow it, so it can come to rest with all the other balled up little unspoken resentments, combining beautifully into one burning, peptic ulcer that only hurts you.

So, lesson #1 – learn to speak up when someone has been an arse and tell them as soon as you can. Whether that means pausing the situation (‘can I just stop you there…’, ‘we’re going to have to revisit this later…’), or walking away until you have the mental capacity to deal with that shit, just don’t ruminate. Although, it’s still something I’m working on if I’m honest…

I get it, we need to protect ourselves and we don’t want to run around hurting people by being ballsy when it comes to our feelings. But, my problem with not being able to be honest with how I feel behind the mask is that I’m not being honest with anyone when I pretend to myself and everyone around me that I’m OK, or I’m fine.

The level of honesty you need to be able to express to yourself is hard. I struggled enormously with admitting to myself that I was not OK with being infertile. It took me a long time to be able to use that label for me, and it still comes hard now…never more so when I see the word being used by people that have been able to have children, albeit with varying degrees of difficulty. Perhaps there’s some work to be done on reclaiming that one…

But the work started for me when I started to write, because I couldn’t speak. I shut down my voice and I stopped speaking until I had the right vocabulary for me to be able to say to people…’actually I’m not OK. I feel broken’. And that was when I started to let people in.

Lesson #2 – speak up for yourself whether it’s in writing, drawing or speaking…this is the first step in starting to process, so just get that toxic shit out in any way you can, because it’s only hurting you.

As I look though my journal, I can see the moment I stopped lying to myself and started to be honest with how I felt about my whole fertility journey. It wasn’t long after my hysterectomy that things started to hit the skids and here is the moment I can see the mask fall away in my own journal (I mean WTF! Why was I lying to myself in my own password protected journal..?)

‘Well Christmas is here and could I give a fuck? Not really. I can’t escape it any more I’m sliding into depression again. I can’t blame it on hormones as they seem to have settled at the moment (no night sweats) and I had my ‘period’. But I can’t stop thinking about my baby…or lack of. I fantasise about it as if it hadn’t ended in a miscarriage – I’d have a four year old now who would have woken us up at a ridiculous hour this morning with excitement. They’d have opened their stocking and be pestering to open presents…

Instead I woke up at 5:10am to silence. I sobbed and acknowledged the loss I feel…

…How many FB posts do I still hide? Lots, especially at the moment with all the posts about children. I sometimes wonder why I do it to myself. It’s like an obscene form of self-punishment…’

I remember writing this because I couldn’t stop crying and it was the first time I admitted that I could feel the creeping sensation that told me my depression was coming back. I utterly dreaded it because I had been there so many times before, but my instincts told me that it was going to be far worse, because underneath all of this, I had finally admitted to myself that there was no hope of children. And that hurt beyond the words that I then possessed and could admit to myself at that point.

The language then followed as I started to admit to myself my hopelessness that I felt and the ‘less than’ quality to all of my conversations with my family and friends, especially those that had what I wanted. But, it also meant that I was able to delve into the layers, or go deeper into the iceberg (albeit, I didn’t know this at the time).

Lesson #3 – don’t expect it to be easy and don’t be hard on yourself, just be honest. It was and still is hard work. As I mentioned on Monday, I don’t know when this will end – 10 years or whether this is it now, so I won’t lie and say that it got easier, because reading my journal I know that simply isn’t the case. But, this has made it easier to instigate boundaries, identify my needs and learn not to compromise when I don’t have the reserves of energy to deal with arseholes.

And that includes whether you’re ready to start raking over all the shit behind the mask. If you're not, then accept that it'll come later, if you are then it's time to make sure you have the right support for you.