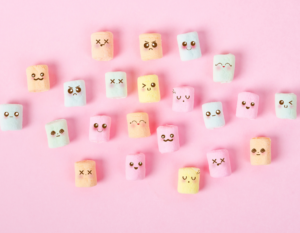 Letting shit go brings up so many emotions, I only wish I had more labels for them

I’ll put my hands up and admit I am the worst person for letting shit go. I can catalogue rogue comments, slights or rudeness for England. And it doesn’t matter how petty it is, I will hang on to that shit to use later when I need it. Granted, it’s not the nicest side of me, but it’s one I’ve had to become aware of and learn to deal with.

And embroiled in that is a need to hang on to things, people, relationships and paraphernalia, long after they have outlived their usefulness. You only have to look in my wardrobe and see the dresses that I have clung on to from my twenties to know I’m not bullshitting about this. It’s not even that they won’t fit anymore, or even that they aren’t how I choose to dress, but nevertheless they stay in the wardrobe gathering dust.

So, imagine my surprise when I announced to you all this week that I was letting go of the old format for something totally different. This hasn’t been a decision that I’ve taken lightly either, because I’ve not always been someone that has been able to talk, or even own my emotions.

I mean it takes a lot of energy and brain space to hang on to shit, including those pesky emotions. Putting on my counsellor hat, I know it’s a control thing, because when I’m feeling shit about myself, I become hyper-vigilant to perceived threats. And these can be anything from someone saying something insensitive about children in front of me, it can a half-arsed joke at my expense or it can be someone failing to take my boundaries into account.

It’s only now as I’ve come some way through the grief that I’ve spotted this pattern and realised it all comes down to my depression and clinging on to my emotions. We all have them and we all express them differently…or not in some instances. Sometimes they get locked away in the vain hope that they will be magically dealt with and then we’ll be better. And this was my pattern for ‘dealing’ with my emotions for a very long time – pretending to myself and others that everything was just peachy. But, it was also more complicated than that, how do I tell people what I’m feeling when I don’t possess the words to describe it to myself?

Anyway, it has started to rear its head again recently, because I’ve had waves of grief hit me from out of nowhere around my miscarriage. I don’t know what’s harder to deal with the constant grief when it first hits you that you won’t have a family, or the random sporadic episodes that come at you from nowhere. But, according to what I’ve read it’s down to the fact that this would be classified as a complicated grief.

Complicated grief is where someone can still feel the loss a long time after the event and the episodes later can be felt as keenly as when it first happened. The problem I find with many of the explanations of this type of grief though is the loss is assumed to be something tangible and this is where it makes it difficult for us to be to completely grieve our loss or to express that loss in a way that others outside the community can understand.

And this grief can come at us at any moment – be that an insensitive comment at work, a poorly executed joke or, as in my case a dream. It was a very vivid dream about my miscarriage and an argument with a doctor who told me I was wrong and was trying to give me a child…needless to say the vividness of the dream meant I woke convinced that life was totally different, only to find my reality is my reality.

It was still with me some two days later. I was still feeling shit and upset. I’d had a couple of good cries, a long run and nothing was clearing it, but then I noticed that the hyper-vigilance was back with a vengeance. I started having the same anxiety over people and patterns in my life. I started getting negative story lines playing out in my head over the next time I would have to meet them and what would happen. Eugh! But none of it involved me owning and naming the emotions and feelings you’ll notice…

So, while I have tried to let that shit go, the emotions are still there. They are still being relived at inopportune moments. I’m still hanging on to the skeletons (as well as the dresses) in my closet and they’re still kicking up all the emotions associated with trauma. And it’s not just me either, time and time again I see people struggling with the emotions of childlessness and being triggered left, right and centre by the same triggers. Nothing has moved on and they continue to relive the initial trauma.

That’s why I want to journey inwards and start putting the emotions under the microscope. What’s going on for us? Yes, we might all have different stories, but clearly we’re all feeling emotions and a lot of them overlap amongst us all. And while I can name some of mine, I notice that many struggle to even share their emotions within safe online communities that get it. There simply isn’t enough vocabulary around what we feel in our community, so how can we express it to those outside to get them to understand our pain?

For those of you feeling brave, I hope you feel able to come on this journey with me. I will probably cry, laugh, get angry, feel fearful, but I hope I am able to help you all realise that we are entitled to feel these emotions and we are entitled to show them too. Who are we protecting when we try and hide them? It’s not us is it?

So, if you’re feeling brave and feel like you can join me on this scary adventure, let’s get down and dirty in those bloody hard emotions and see if we can’t get some solace in sharing and being open and honest with ourselves