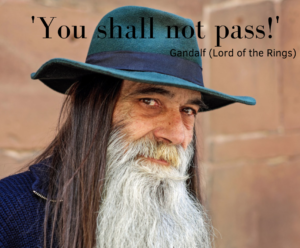 Love me, love my new self-esteem and respect my boundaries...not much to ask.

For the non-geeky among you, please bear with me with all the gratuitous geerkery in this blog post…it’s worth it I promise.

Copyright laws prohibit me from using the actual picture of Gandalf telling the Balrog in the Mines of Moria that he ‘shall not pass’ (and no, I didn’t have to Google any of this). So, I’ve had to use this picture of a more casual Gandalf on his day off. But anyway, while I pander to my inner-geek, I wanted to show an, albeit extreme example of someone drawing a line in the sand and telling someone to pull their neck in.

We’ve talked about boundaries before, in a rather detached way, to describe what they are and why you need them, but we’re into something deep here in terms of learning to assert yourself. And from one recovering people-pleaser to potentially another, learning to assert yourself all starts with you. It ties in with your needs, your sense of safety and most of all it helps pave the way to a more self-assured you. All this from boundaries Sarah? Yes, emphatically yes!

But for those not in the know, because some of you are probably stuck thinking ‘what the f**k is a balrog?’. A Balrog is a creature that represents all the worst nightmares you can think of – fire, shadow and darkness. They live deep underground and scare the living shit out of anyone that uncovers one. Can you see where I’m going with this in terms of our own fears and triggers..?

Now when I think about the run up to the moment that Gandalf lost his shit with the Balrog, the things that struck me were, he spent a lot of time running away from it, but then he got to the point that he had no choice but to stand his ground. His back was against the metaphorical wall and that meant having to face up to the actual issue that was causing his fear, his panic and losing his aforementioned shit.

So, turning this back to the issue at hand, I have to admit that I’ve had a similar issue with Balrogs of my own in the past – one of them is a huge bugger and it all concerns my lack of self-esteem. Wrapped up in that shadowy creature are my broken dreams of a family, my grief over my miscarriage and childlessness and my feelings about my body. All of this wonderful stuff led to my own feelings of worthlessness, which fundamentally projected out into the world as people pleasing.

And if you’re anything like me, as a (recovering) people pleaser, you have no boundaries. None whatsoever! Because, if I’ve learned nothing, I now know that what you believe on the inside will manifest on the outside. So, no ability to think or express your own needs means no way to express those boundaries. But, not content with having no boundaries, you’ll also feel a growing sense of resentment start to build as people fail to respect those non-existent boundaries.

And while it’s something of a double bind, they need to be told where your lines are – what is and isn’t acceptable to you. This isn’t just about you being bolshy though, this is about you clearing some space in order to become who you’re meant to be. I’ve talked about this before – we are irrevocably changed by this loss of our dream to have a family. There simply is no going back to who you were before, because the pain and triggers make that impossible. And so, it’s time for you to step into your inner-Gandalf and draw that line in the sand.

In order to do that, you’ll need to embrace the new you, and feel able to speak up, voicing the objections when people blunder over your boundaries. This sounds like a big deal and for the people-pleasers amongst us, I get it. It felt like a huge deal when I told my husband that I wanted to walk on my own after my operation. It felt like a huge obstacle when I informed him that I wasn’t in the right place for someone to come and stay with us, and it felt HUGE when I had to let a friend down and not attend his 50th birthday party.

But, on the flip side, those that love us will understand and accept the new boundaries that you want to introduce and sustain. They will understand that you need space to nurture your growing sense of who you are, or who you’re going to be. They will understand that you aren’t able to attend certain events because you need to protect yourself and your feelings – besides they’ll learn to be forever grateful if you don’t have a meltdown at their event. But most of all, they’ll be pleased to see you growing your own sense of self-esteem, self-worth and confidence.

Because if you take nothing else from this piece, these boundaries aren’t a luxury, they are a necessity. They help us protect ourselves and they help us to grow and adapt as we come through the grief process. If people can’t respect the process or aren’t willing to accept the new, transforming you and your new boundaries, then there’s a question mark over how much time you should be expected to respect theirs. Because we all have them and we all need them to develop into someone that likes and believes in themselves…or at least has an inner-Gandalf.

So, what’s your ‘you shall not pass’ moment? Have you had it yet, or is it coming?