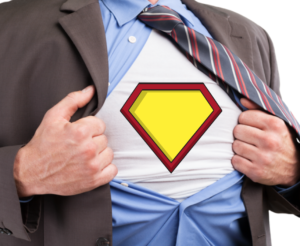 Comparing yourself is always a bad start, I mean even Superman had to start somewhere in terms of learning to be super.

It always amazes me when I think about people I admire and think about how great it must be to be them. I mean if I could just be them, then life would be so much easier wouldn’t it? But would it though..?

I mean the person I most look up to isn’t childless-not-by-choice, so they haven’t got that to contend with, but they most definitely possess all of the qualities that I would love to have. They have the ability to make people laugh, they channel their energy into fighting injustices and they raise the profile of issues that need attention. Any guesses?

Nope, not Superman. My hero is Mark Thomas and I understand that some of you won’t know who he is, but he’s a comedian, political activist and he’s taken on the arms trade, the superpower called Coca-Cola and he’s tackled trespass laws in the UK by walking 10K outside RBS offices in London. And while these are all serious issues, he’s done it with humour, originality and with a cheeky, knowing smile. He’s a legend as far as I’m concerned (more info here if you’re interested https://markthomasinfo.co.uk/ and no I’m not on commission).

But as much as I would like to be like Mark Thomas and be able to what he does, I know that what he does now has been polished and honed over many years. He’s done loads of different things and they have all culminated into what he does now. And doubtless he hasn’t always got it right. The stuff we see is what’s landed right or has got results or has just been something that he was proud of. None of the fuck ups obviously.

And so when we look up to people we have to remember that it could have taken a lot for them to have got to this point, and the chances are there will have been false starts, false dawns, wrong turns and dead ends, but they’ve kept going.

I know from my own perspective the pursuit of children has felt like swimming upstream. Everything about it was bloody hard work and that was even before the miscarriage and being informed that children wouldn’t be possible. That’s not something I say with the benefit of hindsight – even convincing my other half that we should have a family took a lot of patience and perseverance from me. None of it stopped me pursuing it with a passion and a single-mindedness that I’ve not replicated until going self-employed or since returning to running after my hysterectomy.

But all of these things took a lot of work and needed me to make a start. They started from a small idea and built up. None of them were the finished article, they needed to evolve. Even the fact that I’m able to speak to you in videos and blogs about my personal story took me time to build up courage. And if you were to look at my earlier videos, you’ll see a nervous person who was very definitely using the mask to full effect, so that she could pretend to herself that she was ‘over it’…yeah right!

So when I say that the drive for children can be re-purposed, I know because I’m doing it. Now, this doesn’t mean that I no longer want children or that I can suddenly feel OK with it all. I can tell you now that simply isn’t the case and in fact I don’t ever feel I’ll be 100% over the fact that I’ve not been able to have children or that my body apparently wasn’t on my side when it developed Endometriosis and Adenomyosis. But I have put my passion into something else.

And it all started with listening to my own needs and putting to one side all of the measures of being good enough. I’ve talked about this before, but we all get measured against expectations of family, friends, society and bloody Disney (see previous blog here https://sarahlawrenceonline.com/2019/03/not-measuring-up/

). But the not being good enough mantra stops being so effective when you rip up the script and start to walk to the beat of your own drum.

We talked about needs last week and that really does apply here. As soon as you understand what your needs are – even the simple ones like needing a beer, (actually I really could do with a beer…), then you’re able to start setting your own measures of what good enough looks like to you. It means assessing to you what good enough looks like when you’re faced with a decision and that might mean that you don’t react the way that people expect. For example, turning down that invitation to little Tarquin’s first birthday party, because let’s face it he’s not even going to remember the card or the party is he? He won’t feel hurt by your absence. But you’ll feel it for a long time to come if you turn up against your better judgement.

Starting with these small triumphs means you can build up into thinking about what you’re good enough is to start repurposing your drive for a family or even just building a good enough life that means you can find happiness and contentment again. But, don’t go comparing to all of those people that got what we wanted, because you’ll always come up short. As hard as it is to do, I find that boundaries preventing me from coming into contact with things that cause me pain is enough to keep me on an even keel at the moment. Yes, I will face up to my fears at some point, but it’ll be on my terms and on my timing,

And so that brings me back to us as a community – we’ve all pursued the impossible dream of being parents, because for whatever reason we haven’t been able to fulfil those dreams. So we all know what it can feel like to hit a dead-end and feel that we’ve taken a wrong turn, but that shouldn’t mean we have to give up on life. I mean life might not be what we wanted, but we can repurpose that drive into something else, but it’ll take patience and perseverance, even if the dreams are smaller than others, but don’t compare yourself to others otherwise nothing will happen.

So don’t let comparisons with the Joneses down the road stop you in your tracks, because comparing yourself to others won’t ever be an accurate measure.