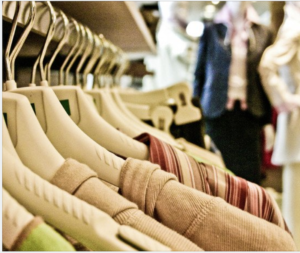 Wearing the new you - if only it was as easy as buying a new top...

Now, it wasn’t so long ago that I was going through this process, so I have a pretty good idea of how it feels when you start to come through something hideously traumatic and notice that you’re not actually that happy with things in your life.

That can sound incredibly ungrateful, if you look around you and see all the people that have it so much worse than you. I know that’s how I felt, but trying to be grateful for a life that hasn’t quite fulfilled your dreams for children, isn’t easy. And I don’t know about you, but sometimes the whole mantra about showing gratitude all the time can really get on my last bloody nerve…

That aside, I’m not so naïve to believe that you’ve all arrived at this point as suddenly as I did after the ol’ hysterectomy (or being told I couldn’t have a family). And neither do I believe that we have carbon copies of the same experiences. So, your realisation about your inability to have the family you wanted might have been a slow realisation rather than the sudden experiences I had.

But when I look back, I realise I have been changing since the time I was told I wouldn’t be able to have children in March 2014, nearly five years ago. It wasn’t a sudden urge to morph into something else in March 2014. No, I had the painful business of having to pick apart my grief, and learn to try and adapt to a life I hadn’t banked on having.

But here’s the thing, I didn’t suddenly stop grieving and then decide to morph into a new person. For me, it was a need to stop, start grieving, continue grieving  and then a slow growing realisation that I couldn’t constantly deal with feeling that shit for much longer.

But, here’s the thing, for me the two processes run together, not as separate things, which explains to me why it is you have to deal with the ups and downs of the grief process and coming out the back end. But the hardest thing for me, was unpacking the grief and looking at what I’d accumulated over a lifetime, including some surprising stuff, that had nothing to do with the childlessness.

And while I didn’t see it as a gift at the time. It was more like a turd, gift wrapped and presented, leaking through the paper and onto my lap. But here’s the thing, the beauty of having to deal with your shit is that in doing so, you unpack a hell of a lot of stuff that you hadn’t realised you still lug around with you.

For me, I hadn’t realised that I still struggled with the bullying at school. As a consequence I had no idea where the people-pleaser persona I had developed and honed over many years ended and the real me started. But who was the real me? At 38, I had no idea who I was, not a bloody Scooby!

So, fast-forward to now and I’m starting to understand and appreciate exactly who I am and what I stand for. I don’t feel confused when a new aspect of myself shows up, I just accept it for what it is – an exciting exploration of the new me. And that also means I can give myself permission to say I like myself. I’ve also developed a very good bullshit detector, meaning I can spot what’s my shit and what’s yours. And believe me if it’s yours, then that’s for you to deal with not me. You’re welcome.

But that doesn’t mean I don’t have bad days or question what I’m doing. There are days when the ol’ people-pleaser can come out in full force and leave me cringing at something I’ve said or done. The anxiety can creep up and tap me on the shoulder at times, but these instances are becoming so rare, that when they happen they hit like a sledge-hammer. *sigh* When I think about how much time I used to spend doing this, it makes me count my lucky stars that I’ve done the work.

So, if you find yourself in this unfamiliar territory, don’t panic and don’t give in to the anxiety, because at some point the new you, just becomes you.