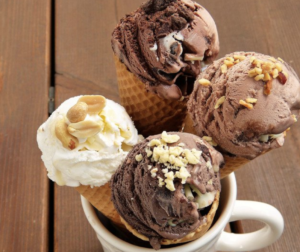 Ice-cream and fake news - what it means to be authentic

Let’s face it the world has frankly got a bit bonkers of late hasn’t it! Not content with having Summer in February, we also have the regular pantomime that is world politics. I’m not going into here, because frankly it’d bore the arse off all of us, but I did want to talk about Donald Trump and his concept of fake news.

We all know that he’s pretending that something genuine is actually fake. And we all know that he’s doing it to fool other people, so that he is seen in the best possible light. But, as I step down off my political soapbox, I can’t fail to notice the real parallel that I have to draw between (not me and Donald Trump…before you think it), fake news and the way we can filter things to match what our egos need to have.

Let me explain what I mean. I’ve spoken about this before, but for a long time I developed and honed a persona that meant I was able to offer what I thought people wanted. A pale imitation of the real me, that was able to deftly swerve controversy. I could avoid giving an opinion, like a politician, in order to not offend people. I mean god forbid I should express a preference for mint choc chip ice cream, rather than chocolate!

I’m exaggerating, but you get the idea. But, it’s not until I came out the back of the experience that I realise how bad it had got. The idea that I had no concept of who I really was, where the people-pleaser started and ended and whether there really was anything left of the 18 year old me that used to rock a black leather jacket and an attitude to match.

It saddens me that I ended up in a state, unable to speak my truth and feel safe enough to be the real me. While there’d be flashes of it, often after a few drinks, it would be mistaken for ‘drunk talk’ or aggression. In truth the falling away of the mask meant that the emotions and opinions rushed out of me, almost as if they knew the mask would lower again and they would have to form an orderly queue until I had a few drinks again.

It did actually feel like a relief when I let it all go, but then in the cold, sober light of the next morning, all I had was a hangover and a feeling of dread that I had said something stupid (and I usually I had, because my mouth often outraces my brain). And often I did stupid things…showing off the less than flattering spanx beneath a dress at a works Christmas party, had me blushing and fearing for weeks, whereas now I would simply find it hilarious.

So, what do I find now in terms of consistently being authentic then? How does it feel to turn up every time as the real me? It feels bloody amazing! No longer do I replay the videos in my head to reduce my own confidence or batter myself over the head over a quip I made before engaging the brain. I no longer feel I have to please everyone, and neither do I want to.

I fully accept me as I am, but I am still learning and there are situations that I am still yet to try out the real me. I’m ready though because I like myself now and I accept that my mouth might run away with me at points. I accept that I might have to apologise on occasions, but mostly I accept myself and that is something that people that come across me will also have to do. They might not like me, but then I might not like them. That’s life and I’m happy with not having to shape-shift to accommodate other people’s shit.

Imagine it! How would it feel for you? Pretty bloody amazing I reckon!