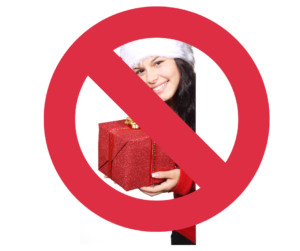 There was a time, and this was during my adulthood that I was 100% into Christmas. I loved everything about it. No decoration was too tacky, no preparation too over the top, and no, plans being made in September, were not too early. But, it has all changed now. Excitement has been replaced with numbness and a sense of detachment from it all since being informed I won’t be able to have children.

I no longer can be arsed to decorate a tree, I no longer buy the Christmas Radio Times and pore over it to decide what I’m going to be watching over the festive period and the thought of family gatherings of massive extended family bring me out in a cold sweat.

To be honest last year after the hysterectomy, Christmas was totally bypassed. I did cook a Christmas dinner, but I still wasn’t firing on all cylinders and could feel the darkness of depression looming, so the dinner was a disaster with a cooked Turkey, that was drier that the Gobi desert. So, I had promised myself and my husband that this year would be different…

But as we start the steep descent into the festive period, I find that I am not looking forward to Christmas. The tree hasn’t been decorated, although I have brought the Chocolate decorations for it. Gifts have been purchased and lots of thought have gone into them, but I’ve not got a list for Santa this year. Cards have been written, but I’ve not watched any Christmas music videos, as I used to do or started watching Christmas movies, as I write them.

What is wrong with me? Nothing apparently. When I read various childless forums, blogs and social media posts from various people from our community, it seems I’m not alone in having negative emotions around Christmas. Time and time again, I read people that say they hate Christmas, they don’t enjoy it or they simply just feel nothing about it. I can imagine that people on the outside looking in wonder, why we’re so miserable about Christmas. But, look at the way it’s all marketed…, it’s a time for ‘family’ and if you don’t have the traditional 2.4 children, it leaves you feeling side-lined, abandoned or just underwhelmed.

What can we do about it? For me and the other half, we’ve gone back to the drawing board with the Christmas traditions. We’ll be spending the day on our own, perhaps watching Elf (and that is the only film that I find acceptable, as it has none of the overly saccharine family-friendly overtones), we’ll be playing board games (yes I am a geek, and proud) and we’ll be having a few drinks. But that’s not to say that we’ll be doing the same in 2019, when it all swings around again – we might decide to do something totally different, like going away instead. Traditions have to start somewhere…

And I suppose for me that’s the key. It’s your Christmas to spend how you want. If you choose to spend it volunteering, then do. If you decide that going to Jamaica to get some vitamin D, rather than shiver in the cold, then why not? If you decide that rather than spend the day with tons of extended family and all of their children, you’re going to spend it with close friends, then why not.

It’s not to upset people, but rather empowering yourself to make a decision and create a day that no longer causes you pain. If this isn't the year for you to do that, then commit to making sure 2019 will be different.