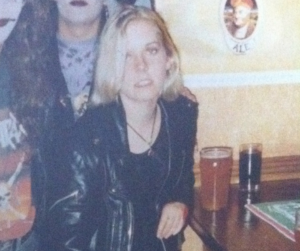 I miss the old me...or at least bits of her

When I think about the youthful me, I wonder what she would make of the 42 year old version of herself. To be honest, that felt too enormous to contemplate, so instead I started by thinking about what I wanted to re-own of the 18 year old me. Which weirdly, then led me to find found this photo.

And it was while I was looking at her I realised I missed her a lot. It’s not just the ability to get away with walking down the local high street in nothing but a crushed velvet bodysuit, a pair of Doc Martens and my leather jacket…oh and a cheeky smile. No, it’s more than that. I miss her ‘couldn’t give a shit confidence’, I miss her ballsy attitude and her conviction that everything would work out ok.

Don’t get me wrong, I know I can’t go back to that place – too much has gone under the bridge for that. Besides, I have no wish to return to the confused, hormonal mess that I was, but there are definitely bits I want back, and I think that’s happening on a level I’d not realised before, as I move through to acceptance of my childless lifestyle.

I’m starting to feel the unwillingness to compromise returning, and a drive to do something meaningful, making sacrifices to get there. I’m re-owning my honesty, although I now am able to temper the brutal truths with a layer of empathy that wasn’t there when was 18. Which, on the plus side, means I’m able to avoid talking myself into so much trouble…at times.

But what I really want is that feisty fearlessness back. That really would be the holy grail for me. Sure, I ran headlong into some stupid situations because of it when I was 18, that being older and maybe wiser, I wouldn’t do now. But I know I have some of it still and I can feel the dormant fearlessness stirring and coming back to me.

Knowing this, I think the 18 year old me really wouldn’t have been proud of the rather wet, apologetic and overzealous people-pleaser that I was at 32. But, I’ve got a feeling, she would definitely like the ballsy 42 year old version that has overcome a hell of a lot of shit to be here and is now standing up for herself again.

So, I guess my question to you would be, what would you re-own from when you were a younger person? If you can’t think or draw a blank, do what I did and find a photo that really makes you connect with that version of you. Ask yourself – if I could wrestle back any of those qualities what would they be and how would they be worn on me now?

Go on, make the younger version of you proud of what you’ve been through and who you now are.