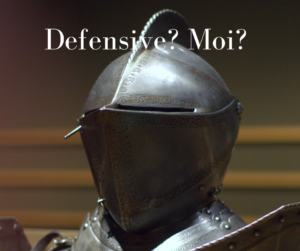 I'm not defensive, you are.

It shocked me this week when I felt some old behaviours sneaking back. I mean what the hell..? I’ve worked bloody hard to make sure they don’t come back, but there they were. The sneaky little shits!

What triggered this? To be honest I can’t put my finger on when it started sneaking up on me again, but I found myself feeling defensive when talking to a friend about my anxieties around working for myself and the fact I’m reliant on me being my best to make sure it works. It felt overwhelming! All they had asked me, was how it was going, and after a massive pause…where I could feel myself donning the steel suit again…I stopped and found myself speaking about the scariness of it all, rather than the joy that I’ve found.

I have to say they were very surprised at what I was saying, because I had up to that point always talked about my passion, how it was my purpose and this showed through when I spoke to them about it in the past…so, being the top pal they are, they asked me what had changed.

The answer, nothing has changed. It was just the age old mindset issue I’ve had – hello again to inadequacy! How does this show up for me? Whenever things have become difficult, or my opinions have been questioned, I have always shrunk back. I take the easy route arguing that I must be wrong or it just wasn’t meant to be. This means, with the exception of running, I’ve never really stuck with anything.

The feeling that I was never good enough, was backed up by this limp, people-pleasing persona that I had built up around me. What did it all mean? It meant no-one could get close to me, because I was all things to all people and therefore no-one could argue with me, simply because I would agree with them – eugh!

Where does this shiny suit of defensiveness come from then? Fear. That’s right, I found myself wanting to hide away because it all suddenly felt very big, very scary and who did I think I was anyway..?

Does this sound familiar to you, as you sit trying to get a grip on who you are and what you’re about now you’re facing the childless lifestyle? It can feel immense when we we’re trying so hard to make changes to ourselves, but the old behaviours are there, pulling us back in. It can be tempting to put on the old comfortable suit of armour and disappear back to the comfort zone. But don’t do it, because there’s nothing better than pushing through the fear, giving it the middle digit and proving yourself wrong.

So, what did I do to stop this, so I could get out of my own way? I journaled all that nonsense out and I made the decision that nothing, not even me, was going to steal my dream away. And you can do the same.

So, what’s your shiny suit made up of? Name and shame the emotions behind the defensiveness